Roughly a month’s length inched through since the day I destined for a new haircut by going blunt with the bangs, instead of my safe-zoned side-swept look.  That span certainly augmented my self-frenzied fact that my mane grows–and sheds–at a visually above average rate.

The 3-week difference, including the light source
The thought of paying and driving to a hair salon solely for the stylist to snip in a matter of 120 seconds had me flinched like I directly sucked on a lemon slice, leading me to scour through numerous DIYs on the interwebs, i.e. through Pinterest and Youtube.
So, thanks to them, now it’s my turn to instruct.

1st, what you’ll need are these 3 everyday items, plus a reliable mirror (mine felt like it was a meter stick away from me): 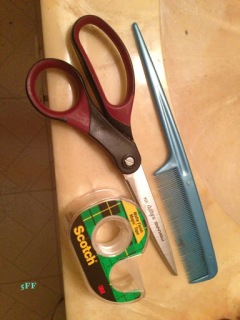 2nd, to be careful not to have the metal interact with the much longer strands, I updo’d my hair, like so:

BOO!
Make sure that:
-Your bangs are parted, as if you made a symmetrical triangle over your visage.  Can’t do this with a digit: that’s the purpose of the tail from the rattail comb.
-Your fringe is almost dead straight.  You’ll be trimming–to your best–at the shape of your original cut.  If they tend to be curly, your straightening iron has a new task.
-These stranded shorties are either mist-leveled damp or dry.  I never have trimmed them wet, but what I did notice was that when I would dry my hair after a shower, my bangs had become bouncier and had uplifted by at least 1/2 an inch–which happened to be my starting goal for this shear madness.
3rd: Now you are wondering, what’s with the semi-transparent tape.  I literally stuck a long piece of it directly and horizontally onto my bangs–in its natural state, not pulled–to easily visualize on the bottom part, acting as the stopping zone, or how far do I want the affected strands snipped.
In the end, though, once I got the concrete aim, then it was okay for me to remove the tape.  If you happen to lose sight suddenly (and figuratively), either use the tape again or go with your pointing and middle fingers as your holding guideline from your non-cutting hand.
4th: Snip, snip, snip–slowly (hullo, beginner!).  To be frank I progressed both by the diagonally vertical direction and the horizontal moves.  But regardless of angle, every time the snips made sounds, I quickly–but not recklessly–retracted my scissors and repeat until I feel that it’s the length I’m cool with.
Can’t vividly think these motions? Picture using a saw or steak knife: notice how a carpenter, lumberjack and cook don’t manually slice like easygoing butter.  That’s because your beautiful locks contain multi-layered textures, just like wood or muscle of meat; it’s the counter-intuitive result of a smooth, not obviously jagged look–unless you desire this style.
So as a complete tyro, a grueling–yet worthwhile–20 minutes later…

My (pun intended) take home suggestions:
1. I do NOT recommend using household scissors, like in the one 2 images previously; so if possible and/or if it’s somehow lying around your home, use shear or barber scissors.  Why?  Simply because the “knives” were too bulky, with its half behind my trimming bangs to forcefully get too distant from my forehead, therefore additionally risking further on cutting more than attempted.
2. Until you can do ninja speed level, please plan ahead and don’t accomplish this if:
-The White Rabbit is seriously being pesky to you.
-It’s an hour or so before the Big Day: I don’t know, graduation, job interview, totally hot date.
-You’re on commute–oh yes, it happens…
3. Know how fast your own hair grows.  It seems that, as far as this season, mine flourishes apparently like bluegrass or bamboo, so I have to maintain every 1-2 weeks.
4. Find some surface where it’s simple to catch the flying hairs without necessarily vacuuming.  Unless they’re metallic-like thick, go ahead with the sink reliability, though you might want to have a drain-cleaning product ready (thank goodness it didn’t happen in my case).
5. Don’t ever secure or hold onto that “perfecting perception” in your mind–maybe except in incredibly extraordinary situations.  Trust me: generally and obviously for this, I’ve gone through this, and I realized that, perfection is reinforcing my thinking that it’s not enough or it’s not clean-cut straight (blah, blah, blah), super stressing the begeezus out of my psyche through the roof!  Otherwise, you’re at higher risk at number 6, which is…
6. Have an emergency back-up in your thoughts.  Because if you did screw up, I hope you have the number of your stylist plugged in your smartphone. (I’m pretty much saying: your fringe, your responsibility.)
It was honestly nerve-wracking and quite scary, but all in all, my lessons were:
1. I learned a new task.
2. I saved gas AND minimum of $7+ (tip included)–depending on salon–that I would be blissful for purchasing nail polish instead.
3. Once I’m developing this upkeep, I save precious time–no commute, no rude drivers, no waiting for a so-called appointment!