Last week was tireless, where my usual power naps were completely devoid and failed to integrate as a result of accumulating lots of mileage from a rental car and the boyfriend’s transitioning to thrive the Phoenician life (yes, that’s the adjective for the capital city of Arizona—you are aware that’s the capital, right?) by apartment-hunting and learning the basic geography thanks to a local friend.  Not to worry, Golden State: I am still planted with you, but I can elongate beyond and thus adapt to how the Southwestern folk enjoy their evening out under humid 90-something degrees.
One tableau is Cibo, pronounced CHEE-bowh if going hardcore on Italian, where it brilliantly mimics a quaint house that frankly fit in with the neighborhood homes and apartments.  The main difference, besides the purpose, was from the outside lots of patio seating were lovingly scattered for guests who were either plucky savoring the desert atmosphere or were interested in hearing the night’s music gig.  Such tyros of the moistened heat gathered safe and sound inside a well-conditioned, unpretentiously homey interior, full of an equal ratio of crowding, all awaiting to have their hands full on Cibo’s renowned pizza, categorized in 2 statements–Red/Rosse and White/Bianche. 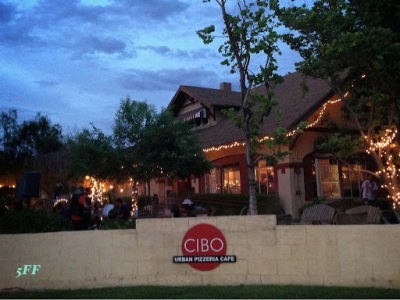 Dinner Menu
The party of 5 commenced our cheesy rapture with the Burrata($14), as highly recommended by our productive waitress.  Never had this antipasti?  Think of the quintessential mozzarella, but more softened and creamy in silky ball form.  In this case multiply that by 2, then add a lavish drizzle of sultry and decadent balsamic glaze to altogether knife-spread at ease with the viciously toasted yet deliciously crunchy sliced baguette, and finally topped that off with at least one paper-thin, divinely smoky Black Label Prosciutto Crudo to summate into an effortlessly awe-induced emotion—ahh, at the very beginning.

From the Rosse half of the 10-incher was ordered as a Diavola and the other a classy Margherita to tally up to $13.  The former was amassed with sumptuous tomato sauce spread below the much more familiar mozzarella, meanwhile culminating Cibo’s way of an invitingly spicy and flavorful salame, aka sausage.  I missed the action on the latter, yet the boyfriend simply adored this paradigm, stating that the light tasting tomato sauce, mozzarella, and fresh basil were spot-on delicious.  Despite the minute setback, the basil leaves could appear more orderly than the actual picture.

Top half is the Diavola, bottom half is Margherita
On the non-lycopene, mozzarella-based Bianche spectrum lit up half of a Procida and half of the Tartufata, totaling to $14 while both amassing the prudently rich prosciutto crudo and overall powerful flavors.  Distinctively, the former was carefully orchestrated with the mellifluous slices of Asian pears, peppery greens of arugula, and acutely phenomenal goat cheese, which might taste-wise be too discomforting for those not personally in favor of strong dairy products.  The latter submitted a bossier gusto, thanks to the finishing touch of drizzled, yet visually unnoticeable white truffle oil over the white mushroomsand cheese—again might win a certain pool of gastronomes.

Left half is Procida, right is Tartufata
However, like all matter, one that possesses in such immediately positive attributes has some degree of flaw.  The thin crust for both colors certainly flaunted the yeast-y taste, but if not prepared to engage in the small, triangular slice by utilizing both functional hands, the flimsy texture might unfortunately spill part of the precious ingredients, such as the spicy salame.  That said, if your teeth pines for sounds, adamancy for a crispier, longer cooking time in the brick oven—assumingly—is firmly recommended.
Whether ordering pizza with more sophisticated ingredients or a customary take, Cibo is indirectly encouraging to set a date night; the side effect, though, includes a slightly boisterous ambiance especially if inside.  If you happen to not be fond of no reservations, unless it’s a minimum of 6 guests, then have 5 of your crew ready to delve into a 18% fixed gratuity and zero split check policy underneath such picturesque, romantic scenery.  Just please regard the Burrata if you are not considered a lactose intolerant, vegan, or anti-microbe eater.