Pertaining to the sweet category of food trends, my fragile metabolism and taste have been hyperactive for indulgences like macarons, red velvet everything, decorative waffles, pumpkin spice delectables, and the familiar hybrid of a croissant and a donut.

Another potential food fad could emerge, after getting sweetened with a combination of artisan ice cream and the old-fashioned, simplistic donut.  This is what Afters Ice Cream has been screaming out since February 15.

Off the 405 freeway in Brookhurst Street and Talbert, accessibility of parking is a breeze–assuming that you don’t mind an opportunistic walk.  It is sandwiched between Pick Up Stix and the flashy Hallmark store, however mentioning this was pointless because the lengthy hour long line of sweet teeth of all ages gives the location away.  Making the establishment more attention-grabbing were the previous businesses that left their namesake scars behind the “Ice Cream” signage.

Took This Pic When We Were in Line

My friends and I arrived on a Wednesday afternoon, and we were lucky taking a parking spot very close to the ice cream store.  Still, that couldn’t defeat the odds of waiting the same amount of time as the Splash Mountain ride.  At least you’ll have more time to gossip uninterrupted–without those bouncing noises in sit-down restaurants–catch up on Instagram photos, or even study some terminology on your note cards from StudyBlue (or another academic app on your smartphone).

Even inches from the entrance line you’ll see Afters displaying their logo attire almost as if they were literally chilling in the see-through fridge.  Then you’ll notice the plastic crates deliberately stacked to take role as the velvet rope at Haunted Mansion, but instead of feeling red you’ll see (and likely feel) almost randomly stocked items, indicating ingredients used in their handcrafted ice cream. 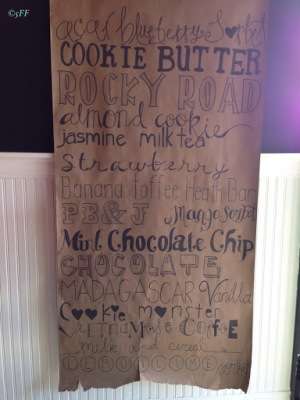 Note: Not All Ingredients Are Avail Every Day
In actuality, one of my aforementioned friends and I retrospectively drove to Fountain Valley Plaza for that undying glimpse of the number of customers anticipating for what my friend informed me that Afters “put ice cream inside the donut.”  After denied access of our own consent, a few days later I phone-talked to another gal friend describing this why-hasn’t-been-thought-for-so-long ingenious culinary phenomenon, and she insisted that I indulge wholeheartedly with these 2 sweet sensations packed together, suitably called (and possibly trademarked) the Milky Bun.

Hours after our phone conversation, my friends and I nabbed that lucky parking spot that Wednesday afternoon for that and the artisan ice cream–moment involving roughly 15 flavors.

How the Milky Bun is Created Before Consumed

If you do dare order the Milky Bun, you can choose to have the donut plain or glazed.

With the $5.00 double the trouble comes with one free topping–or sauce.  Otherwise pay up an extra half dollar.

One of my friends gladly took the classic approach by going Single Scoop plus the 50-cent topping, much more specifically the Vietnamese Iced Coffee Ice Cream with Fruity Pebbles. 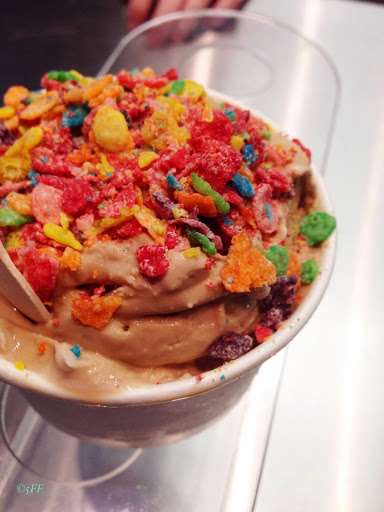 If you demand a tolerable dose of caffeine, but would rather embrace on a more luscious, thicker texture, this version of Cafe Sua Da could hype you up.  This would have been my request, had I visited Afters as a solo adventure.

However, after tackling other flavors to sample, I ended up having a serious date with the Jasmine Milk Tea Miky Bun, Glazed, with Afters [Cereal] Flakes, handsomely served on parchment paper as if folded as a bulky ice cream cone. 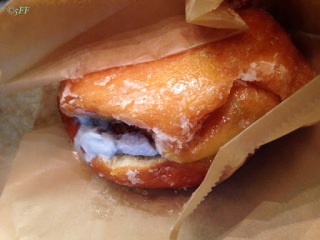 Just like my infatuation for certain milk teas for its impacted sensation, I contained the same emotion for Afters’ extravagantly flowery and gorgeous punch.  Perfume-like level could be a more candid way to interpret this, so this tone could vary widely on individuals’ taste, all thanks to genetics.  For a vivacious crunch, I chose the Afters flakes, which simply reminded me of those corn flakes made by a famous brand starting with the letter K.

Yet, I put myself at palatable and dietary risk to have this periwinkle-colored creaminess into this absurdly yet undoubtedly rich, overwhelmingly saccharine glazed donut.  If you dare rip off a little piece of the fried dough alone and bit into it, it’s like eating from the proverbial, local mom-and-pop shops on your way to a 9-to-5 shift.

Nonetheless I pushed myself already to my limit of consumed sweetness that I managed 90% of the Milky Bun.  So if I were to reorder it, I don’t mind at all sharing this with a friend or foodie partner.

In addition, the mental and physical sugar concentration, plus a lively conversation, of this afternoon treat led me to a slight oblivion on the texture of the ice cream, resulting in a second visit (barely a week later) with one of my friends from the previous rendezvous.  Those few days curiously showed notable upgrades, such as giant refrigerator (pictured below) next to the fully stacked plain donuts, plus a new ice cream flavor, the “Churro.”

Plus we arrived at an amazingly short wait, on a Monday.  So, here’s my bonus, 2 cents to you, lucky reader!

No pun intended (again), but after sampling the “Churro” flavor, the essence of cinnamon was taste-wise slightly shimmery, but it could attain a heavier kick–though I can imagine many other customers falling in love with this more instantaneously.
Then I asked one of the servers if half scoops for my Single Scoop is permissible, and joyously I got to enjoy 1/2 a scoop of likewise magnificently rich, chunky, and scrumptiously intense Cookie Butter and 1/2 a scoop of that consistently divine Jasmine Milk Tea (for a total of $3.50).  Meanwhile, my friend ordered the Milky Bun, this time unglazed–thank goodness–and filled with a nostalgic-sensing Peanut Butter & Jelly Ice Cream.

Now concentrating on the meaningful frozen texture in my scoop, it was slick, thickly whipped, and indubitably smooth.  Issues of air embedded within were close to zilch, though like the typical frozen brands, such as Ben & Jerry’s, our ice cream melted easily during a chill post-rainy weather.

Bottom line: if you must endure a line analogous to popular park rides, a middle-profile concert, or even the original Pink’s Hot Dogs, I’d say go after the uncommon yet grand flavors, i.e. Jasmine Milk Tea, Vietnamese Iced Coffee, and Cookie Butter.  Other likable flavors of mine include Cookie Monster and Almond Cookie, and I have yet to get refreshed with Afters’ sorbets.  Outdoor seating is prepared to take on the dairy spillage coming from that 4-step sweet process!