Uncertain whether to write this under Foodie or Frenzy, I think due to this comprehensive story that occurred on this honorable federal holiday, the latter one will suffice to me.

The morning started off smoothly and freely with much lighter traffic on the way to Santa Monica–hmm, wonder why.  Despite the 30+ minute drive and parts of the South Bay still blanketed from its dense morning fog, I didn’t torture myself from utter starvation by chugging a glass of soy milk at home before lift off.  In other words: a little protein will tame my tummy justifiably.

I arrived at the famed donut shop, where–quite awesomely–it has its own private lot, instead of metered parking or the permit-only residential parking (the latter being the personally irritating landmark of metro LA, but I understand the reason). One caveat: a 30-minute limit–which is why the turnover at DK’s Donuts was as brisk as the timing of those subway doors opening and closing. 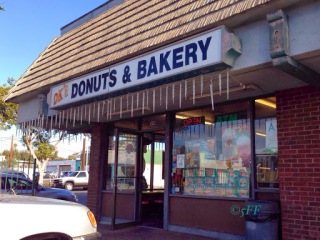 Below the signage are synthetic icicles…

Within a swift 2.5 minutes (I’m postulating), from a specific, diverse plethora of the O-Nuts (which is the same as what you may be guessing that’s located in the NYC) mocking my deep fried attitude that doesn’t include potatoes, I eventually ordered these for a total of $5.05, cash only: 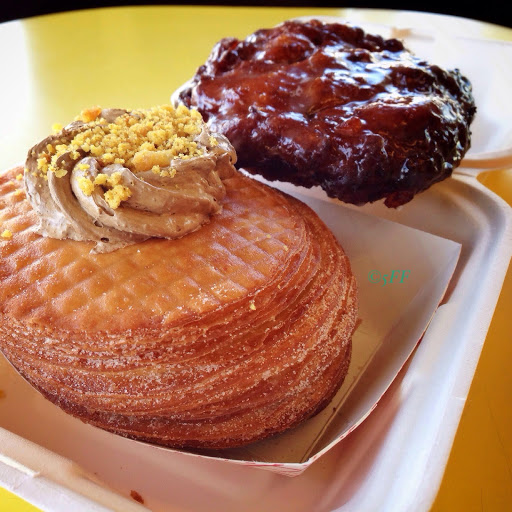 Good golly (who the heck uses that phrase anymore?!): I held the latter as if it finished its bubbly hot oil bath about a couple of minutes later. 3 adjectives that came in my mind about the Apple Fritter were svelte, mouthwatering, and comforting with no chance of being brittle or greasy.  As for the tasty talk of the town, it too wasn’t at all soaked with that bubbly oil, leaving off with a discerning, slight crunch and multi-layered flaky and just-right soft interior.  In between those layers–and on top of the O-Nut–contained a custard-like cream emitting a potent amount of that fall favorite in 2013, which I didn’t mind reverting to briefly.

Returning to DK is not an option, as the flavors for those O-Nuts such as Taro, Red Velvet, and Green Tea are still wailing for me to munch on.

Moving on, as hours of studying and internet surfing elsewhere, then driving eastward to the birthplace of UCLA, and subsequently walking off those simple carbohydrates led to the next eating encounter: Palomino Restaurant for the 1st day of DineLA’s Restaurant Week.  Particularly, throughout delving into the site, it’s one of the few participating restaurants where for lunch they offer appetizer, main course, and dessert, rather than the current 2-course option plus a supplemental sweet choice at a given cost. 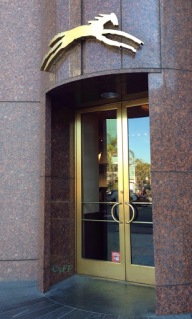 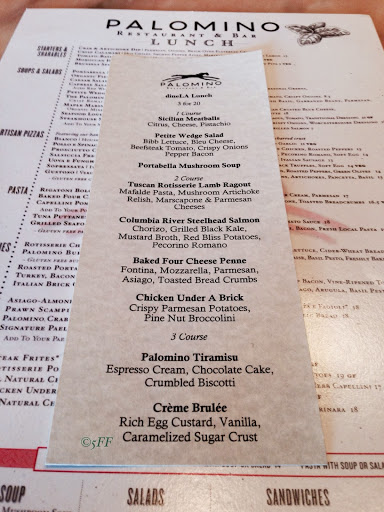 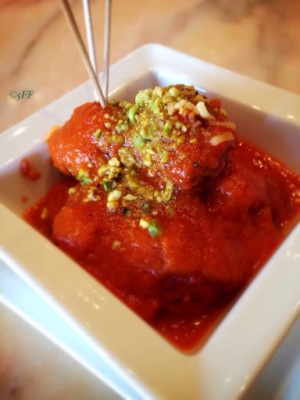 1 Course: Sicilian Meatballs
The sauce was fine, and though they were neither bland nor irresistibly tasty, if the citrus-y essence and the consistent moisture were genuinely involved in the 1st course, these filling morsels would have been tremendously exceptional and recommendable.  In other words: the salad was my other choice… 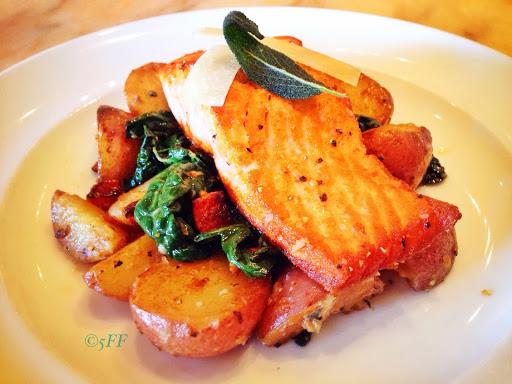 I allowed my recent deprivation of fish consumption to settle this choice, instead of the curious Chicken Under a Brick which it was served gigantically to another customer.  Nevertheless, here’s where the impressiveness kicked in: the strikingly flavorsome mustard sauce, the wilted kale, and the precisely salty and savory chorizo cubes to bite alongside the tender filet, cooked medium rare.

Maybe because of the amount of water I heavily quenched due to the unusually hot winter weather–consecutively since the birth of 2014–and maybe because my adrenaline couldn’t settle down as I looked into my timer for how long I parked at those dreaded meters, but the entire 1st course and half of the 2nd were all I could physiologically endure that for the 3rd and final course… 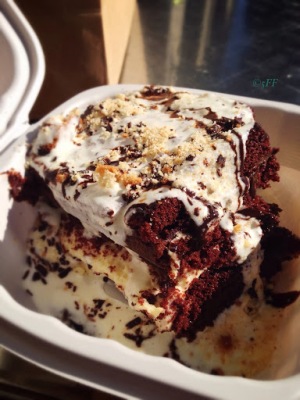 As you looked more meticulously, my surprisingly occupied stomach was my rational excuse to put this dessert in the biodegradable takeout box.  At the same time, I not only snagged one bite of it when I returned home right after, I saved needless calories from those easily ingested and fat-encouraging sugar molecules when not in use.

Speaking of use, for dinner, I had plenty of choices, whether to eat my leftovers as is, eat something entirely different from my fridge or pantry, or play with my leftover salmon… 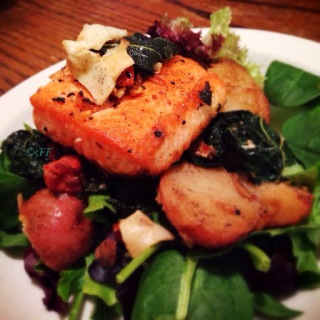 To make this low carb sensation a teeny bit tastier than my original lunch, a touch of fresh, minced garlic was gladly added to sautee the potatoes and fish, plus that red rooster sauce which I forgot to dab before this snapshot…

Afterwards my eternal curiosity took a few bites of that refrigerated tiramisu, which was basically a moist chocolate cake with a pinch of brandy.  At least it’ll go sweetly with coffee black the next morning!

So, the 3 Lessons I learned from this free-willing day:

1. DineLA is still a hit-or-miss mission for this foodie 5-Footer.  The $20 value for 3 courses was undoubtedly laudable, especially when it’s uncommon to find anymore.  But from my experience, it looks like Palomino’s Happy Hour would be my next edible task.

2. Make your leftovers something that you will enjoy eating.  Fellow citizens who came up with copious ideas of creating recipes using leftover Thanksgiving dishes weren’t intentionally frivolous!

3. I will treat parking in LA like any ordinary day in LA; apparently the meter rule still applies on MLK Day.  Otherwise I might have been gullible to become those pitied lemmings.