Assuming most of humanity in America have followed up on their food pop culture: 1st came Subway sandwiches (and its rivals), then the gloriously organic-embracing Chipotle (which I’ve yet to see competitors emerging brazenly).  Nowadays you’ll discover pizzeria places where individual-sized orders–and the likewise creative option of virtually endless toppings–are more favorable than a stranger driving towards your home (although it might imply a Californian issue, but you would have to experience this West Coast living if you’d like).

Storefront
Toppings–opened officially on December 7, 2013–belongs to this Americana lifestyle, located right next to Coffee Bean & Tea Leaf, as well as nearby the PCH traffic circle (which I still am petrified driving on).  You first wait in line like any noble citizen, while (hopefully) you are glancing at the simplified menu by either the one hanging above and perpendicular to the cash register, or the thinly sheet version very likely intended to keep for knowledgeable use.

Step-by-Step Create Your Own Pizza, or Specialty?! CHOICES

I am all hands with the CYOP approach, so long as a customer has not only creativity streaming all over her spirit, but the comprehension of how each ingredient can be complementary to each other, rather than them battling against the so-called weak teammates.  Another caveat with the former is that more toppings will physically overwhelm the thin, tortilla-resembling dough, unless the customer requests the carbohydrate foundation to be cracker-like well-done.

Once that initial or final idea has been spoken towards the assembly line pizza maker, certainly let the individual’s imagination run wild (or steady) before the thin crust delicacy is literally set on fire–pit oven for a claimed 90 seconds.

How They Pizza Assemble 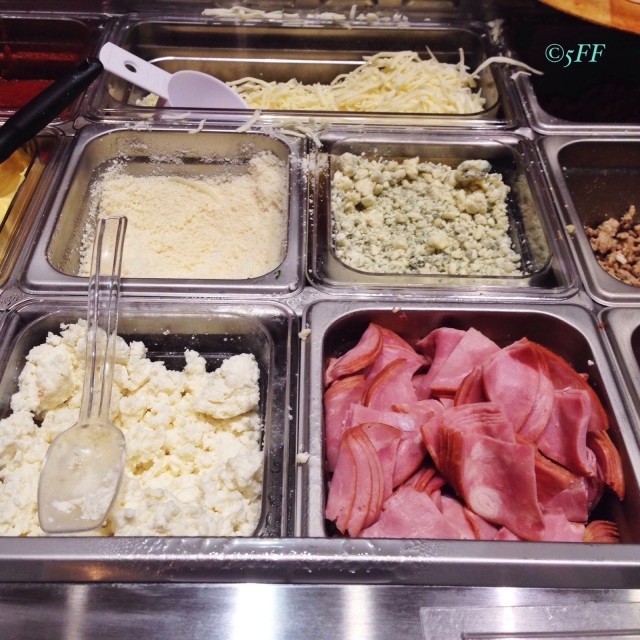 The Cheeses plus Bologna

Some Fanciful Options (Clockwise top left is Pineapple, Pear, Spinach, Artichoke, Banana Peppers, & Capers)
For me, going by the 4 steps of the CYOP:

1. Crust: regular; the gluten-free option asks for $2 extra.
2. Sauce: (regular) Red with deliberate yet liberal spots of Pesto; this you may decide not to add this at all
3. Cheese: Ovalini Mozzarella, Gorgonzola, Parmesan, and bits of regular Mozzarrella
4. Toppings:
-Vegetables: Sun Dried Tomatoes, Garlic, Basil, Sliced Tomatoes, and Arugula
-Meat: Sausage (to mend an omnivorous appetite)
-Other: Dabs of Garlic Butter, and a little coating of melted butter on the edges of the dough

And a dash of Dried Oregano altogether were compiled into… 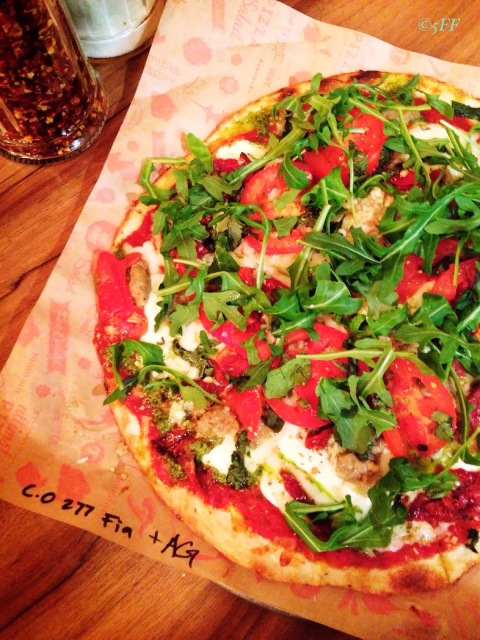 Decoded: Custom-Ordered #277 for Fia, plus Arugula on top after fire-cooked pizza

Frankly, I would love to add more veggies, but that would undoubtedly require holding a slice more conscientiously, like balancing the entire Jenga tower on one palm of the hand.  But that’s fine because… 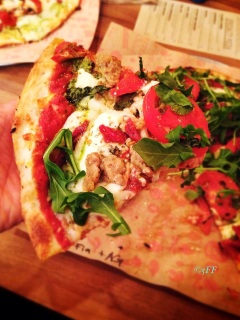 Whether with or without the typical pizza “condiments” on almost all tables, every aforementioned ingredient from both my own and my friend’s customization was proudly discernible for their flavor profile.  Most notably, I could easily taste the doughy crust, and the adage, “a little goes a long way,” perfectly applied to the pesto dabs and the superlatively seasoned and juicy sausage bits.

Heck, these flavors grooved my mouth away much more festively than when I dined ornately at this restaurant in Phoenix over 6 months ago.  All in all, my choices fortuitously supported the balance of gusto, rather than the clumsy clash.  Even when ravenous, I ended up with a couple of slices for me to devour the next day; moderation, come on!

What disadvantages have I stumbled upon? In a minor tone the arugula weren’t pristinely fresh.  In spite of plastic knives, we would need the old-fashioned pizza cutter to apply more pressure on the crust than I expected, though I’m sure a customer would have that handy in his pocket, alright.

Our dinner was quite indelibly scrumptious that my friend’s significant other decided last minute to meet us to then eat pizza his way, additionally appeasing the end of our doughy night with these Cinnamon Strips ($2.50).

Thinking exactly like me, my friend exclaimed that, based on picking only 2 of the 4 options–chocolate, strawberry, caramel, and condensed milk–for that merry drizzling, these sweet pieces were excel more deliciously if we replaced the strawberry with the one with the cream color.  Though I also thought that the crust could have had slightly softer texture, for $2.50 that portion I wouldn’t fuss that maniacally.

Come to think of it (again), if only this fun-inducing, economically pizza place appeared during my years at CSULB, which is more or less 5 minutes driving distance.  Or maybe that was a good thing it wasn’t actively conceptualized that time, for cautiously financial and moderately healthy reasons.

P.S. Perhaps a tingling question is whether I like this better than the expansive Pieology.  Answer: Y-e-aaaaaa!