Our first-ever trip to the Pacific Northwest called out for at least one bucket-listed tourist attraction, requiring a modest tolerance of crowds and wayward walking.

Behold, the 100+ year-old Pike Place Market, just 5 or so minutes away from the University Street stop at Seattle’s Light Rail.  We arrived in the traditionally early hours of lunchtime, so our first edible venture was where both my friends and bloggers have commended as we invaded the Seahawks’ terrain–Pike Place Chowder.

New England Chowder & Smoked Salmon Chowder
Located in the higher incline of the Post Alley, the sizes of their luscious, warm concoction sensibly vary, depending on the level of hunger and the amount patience knocked off thanks to the gradually longer line.  In spite of the seemingly numerous, appetizing flavors of chowder available, I deliberately chose the 8-ounce Smoked Salmon, while my S.O. pounced on this combo that included the 8-oz classic, creamy deliciousness–i.e. New England–a small Dungeness Crab Roll, and a regularly sized drink, i.e. iced tea to sway from my personal distaste on soda.
For 2 persons with evidently different heights, the entire tab came barely at $20 total–tax included.

Keep Clam & Chowder On
Speaking of burning, the piping hot factor on our soups slightly singed on my very sensitive tongue–and for the record, I am the one responsible for not blowing off its steam strongly enough.  That, however, didn’t stop me at all on savoring the well-balanced, creamy consistency and the sheer generosity of the wondrous, fresh-off-the-dock flavors from both the off-white version and the salmon-colored version (pun intended).
As much as I sipped joyously on my orange-y comfort food, the S.O. thought that it had a more intense tang due to the obvious smokiness of the tender salmon and the zesty capers.  So if you’re looking into the likewise tasty yet more tolerable flair, opt for the traditional New England.
Meanwhile, the Dungeness Crab Roll provided just the sweet and delectable sensation we have looked forward to on fresh crustacean, with the soft bread that nevertheless was sturdy enough for this protein pile.

Snap!
Literally moving on to our next “quick” eat, we eventually spotted the Original Starbucks store.  Time was seriously precious to our short-feeling itinerary, so the least we could accomplish was taking a snapshot of the storefront and The 5-Footer.
Afterwards a glance of these pearly, fresh salmon brought attention to another popular Seattle, Russian-influenced treat: Piroshky Piroshky.

They sure taste more beautifully than they appear
Before enduring another long, stuffy line, consider the straightforward ordering-online approach and you’ll zip through while continuing with touristy eye candy.  We nonetheless conformed unintentionally, waiting and stepping inch-by-inch for an astounding 5 minutes–thrice as less than the wait for the chowders at opening hour.
We gradually transitioned our appetite by ordering both the savory and sweet breads, which I observed their prices at about $4.00 on average.  Hotly fresh and soft were indisputable, as we reverently bit into the charismatic Chocolate Cream Hazelnut Roll, the beloved Apple Cinnamon Cinnamon Roll–which sensibly has less sugar than the ‘Murican counterpart–and the outstanding, ambrosial Smoked Salmon Pate.

The Shapes Say Them All

The Inside of the Smoked Salmon Pate 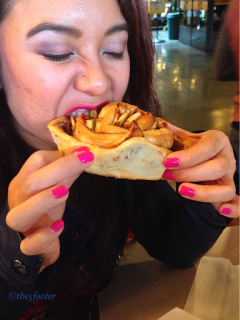 Being careful not to smudge my lipstick
We then searched for one of the least hygienic spots in the West while exploring around 7 stories of and below the main Farmer’s Market.  We later realized that this local “landmark” thankfully didn’t share the same wall as Pike Place Chowder… 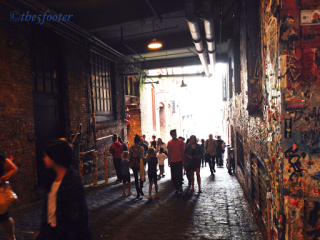 …Reveals the ever-increasing Gum Wall (Find Me!)
From braving the saturated amount of oral microbes stuck in these chromatic yet sticky chewables, we gladly took the stairs back into the main Farmer’s Market.  More walking, huffing, and puffing were anticipated immediately after leaving Pike Place Market, and thus our way of storing and burning more energy while indulging simultaneously, was scouring for one last eat for the late morning/early afternoon: Daily Dozen Doughnuts.

How they make these Triple D’s
Gazing and passing through the famous fish-catching act, no wonder 2 good friends of mine fervently recommended me to this donut cart.  Unlike those chained counterparts where they serve their fritters in textures like cakey, airy, or crazily unctuous, these pocket-sized morsels consisted of fluffy, slightly doughy delicious.  If you’ve ever eaten something called a beignet, that’s what the bite closely matched with–especially the ones doused with powdered sugar.

12 differently flavored minis were our pick as we concluded our market session: Sprinkled, Glazed, Powdered Sugar, and Cinnamon.  The last 2 were my personal favorites, and unfortunately Assorted somehow didn’t include the tempting Maple Bacon.

Roughly 3 hours on this blazing, local treasure were worth discovering and spending–both money-wise and date-wise.  Until then, Pike Place Market; you’ll most likely see me sooner than expected.

Look For the Washington State Ferry